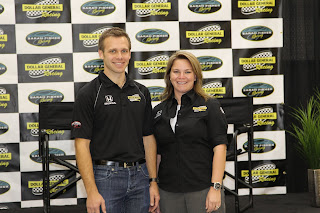 Today's big IZOD IndyCar Series news came out of the Sarah Fisher Racing camp, as team namesake Sarah Fisher announced her retirement from IndyCar competition. While her No. 67 Dollar General Dallara-Honda will return to competition next season for nine races, Ed Carpenter will be its new driver.

Fisher steps aside after 25 years competing in various forms of racing, dating back to her early childhood. Ever since her early start, she's been a go-getter and an overachiever, scoring everything from multiple World Karting Association championships to IndyCar drives, all the way up to a Formula 1 test with McLaren-Mercedes in 2002. Off the track, she's even written a book, entitled "99 Things Women Wish They Knew Before Getting Behind the Wheel of Their Dream Job". You name it, she's done it.

She first began contemplating a transition out of the car earlier this year, when she gave Graham Rahal a three-race deal to drive the No. 67 to keep him in practice as he looked for more consistent employment. With three full seasons gone by since her last top-10 finish, a seventh place in IndyCar's first Iowa event, and a family-owned team running a part-time schedule against such superpowers as Chip Ganassi Racing and Team Penske, her prospects for taking the checkers as a winning driver were slim.

But Fisher showed that she could still hang up front with the big boys at Chicagoland this year. She took the lead under caution thanks to an alternate pit strategy, holding it for 10 laps. Although Ryan Briscoe got by her soon after the green flag waved again, she managed to hold her position in the top five for quite a while afterward. If anybody ever doubted that she still had the skills to run up front, even after her brief NASCAR sojourn in the middle of the decade, Chicagoland was their rebuttal.

Now, Fisher transitions into her most difficult and important role yet: full-time team owner.

Yes, this will be Sarah Fisher Racing's fourth IZOD IndyCar Series season, so it's not as if Fisher hasn't had to face those difficult ownership decisions before. Things will certainly be less tense around the SFR shop than they were in 2008, when she and husband Andy O'Gara formed the team out of pocket. That year, a sponsorship disaster with RESQ Energy Drink and an Indianapolis 500 accident nearly sidelined the team for good before it could even get off the ground.

Things have been looking up ever since Dollar General stepped in for two late 2008 events. The team expanded to two cars for 2010, adding Jay Howard to a limited slate of events, and of course had the popular Rahal compete in three events.

Now with Carpenter behind the wheel for the team in 2011, and the elimination of the perpetually off-the-pace second car, Fisher can fully focus on building a strong race team that will compete for IndyCar wins and championships for years to come. Carpenter and Fisher alike have been featured in successful and popular IndyCar marketing programs over the past few years; while Fisher has become a prominent face in Dollar General marketing, Carpenter has represented longtime Indy sponsor Menards and newcomer Fuzzy's Vodka in the past few years. The tandem of two affable American racers with old-school roots (both came from USAC backgrounds) should prove interesting to new potential sponsors.

Of course, Fisher's transition to full-time ownership represents a step forward for IndyCar for more reasons than that. Most forms of motorsport have never seen a top team led by a female owner, IndyCar included. Fisher has the potential to do that with SFR.

IndyCar has already asserted itself as a predominant form of racing for minority drivers, especially women; a record five female drivers attempted to qualify for the 2010 Indianapolis 500, with four - Fisher, Danica Patrick, Simona de Silvestro, and Ana Beatriz - competing on race day. But of the four, only Fisher was financing her own car (not counting Patrick's equity stake in her Andretti Autosport team). And Fisher almost put two cars in the race, with Howard only failing to make the race due to faulty Bump Day strategy. That's a big deal for such a small team, no matter how many cars show up.

Fisher has been embracing the ownership role more than that of driver as of late, anyway. Putting Rahal in the car was a solid move that led to the team's first-ever top-10 finish, a ninth place run at St. Petersburg. It was a decision to improve her team's performance, not to feed her ego and keep her in the car, and it paid off. Fisher gave her sponsor a top-flight driver and a chance to make some noise in their brief time together, and garnered a lot of respect from IndyCar fans and competitors - not only for employing the best driver not to have a full-time ride, but also for knowing when to step aside for the benefit of her team.

Now, the team has a chance to score some underdog oval wins with Carpenter, who came tantalizingly close to pulling out another surprise Kentucky victory this year. And Carpenter has another chance to learn the road courses, his longtime Achilles' heel in IndyCar competition.

Who knows, a strong 2011 season could attract enough sponsors for full-time competition in 2012, when new chassis and engines debut. And in the mess that comes with a blank slate, you never know what a little team could pull out of its hat.

Could Sarah Fisher be the first female owner to win an IZOD IndyCar Series race? Perhaps even the first to win an Indianapolis 500? Don't doubt it. She's never been one not to accomplish her goals.
Posted by Christopher Leone at 12:38 PM