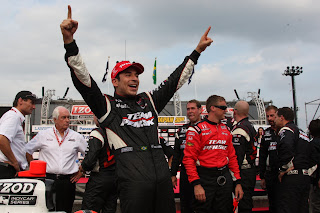 Point for point, 2010 was one of Helio Castroneves' best IZOD IndyCar Series seasons of all time.

Scoring 531 points in the series' 17 races, Castroneves took three victories to finish fourth in the series championship. It was the fourth top five in the standings that Castroneves has taken in the past five years, and it came without missing the season opener as he did last year. He also reduced his DNF count from four in 2009 to two this season, while matching his two poles from last season as well.

The season started off strong for Castroneves, as he took top-10 finishes in all four road and street course races to open the season. After teammate Will Power won in Sao Paulo and St. Petersburg, Castroneves kept up Team Penske's momentum when he scored the victory in the inaugural Indy Grand Prix of Alabama. Though he was 42 points out of the lead heading into the first oval stretch, Castroneves maintained second in points at that time.

From there, things got a little less consistent. Castroneves' highlights of the second quarter of the season were his fourth career Indianapolis 500 pole and a runner-up finish at Iowa, but a DNF at Texas in a wreck with Mario Moraes didn't help his cause.

A finish on the edge of the top 10 in Watkins Glen and an accident with Vitor Meira in Toronto dropped him all the way to sixth in points heading into Edmonton, a race in which he had finished second the previous two years. Castroneves was poised to improve on that personal best until a blocking penalty dropped him to tenth in the order. A heated Castroneves lost his cool, grabbing IndyCar officials post-race in his frustration.

From there, Castroneves began to regain his stride, though it was too little too late.

115 points out of the lead with six races to go, he would have needed to finish in the top four in each of the final six races while all of his rivals struggled tremendously. A refocused Castroneves did his part, finishing no worse than sixth in the final six races, but it would not even be close to enough.

The highlights of Castroneves' late season run included consecutive wins at Kentucky and Motegi. The Kentucky win came to the surprise of most, as Ed Carpenter had been dominating the race; Castroneves used an alternate fuel strategy and low throttle levels in the race's closing laps to coast to the win as everybody else pitted. In Japan, he led 153 of the race's 200 laps, including a stretch from lap 118 to the finish.

Coming into Homestead, Castroneves had a shot at securing third place in the standings, but a fifth place finish was not enough to maintain the spot, as Scott Dixon passed him for the spot with his victory.

2010 wasn't Castroneves' finest season of all time, especially compared to his DNF-free tear in 2008, but worked out to be one of his most consistent seasons since road courses were added to the series. Though only the second-best Penske driver this year, Castroneves proved that he remains one of the series' top drivers, even after over a decade in the sport.
Posted by Christopher Leone at 8:11 PM