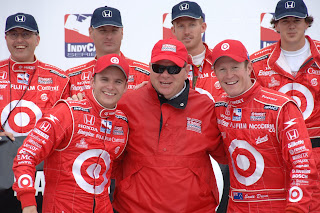 The Rolex 24 at Daytona is one of the most prestigious sports car endurance races in the world. Held on the road course inside the famed Daytona International Speedway, the race was established as a three-hour event in 1962 before eventually expanding to 2000 kilometers in 1964 and taking its current form in 1966.

Most sports car events are much shorter than the Rolex 24, especially within the Rolex Sports Car Series that has contested the event since 2000, and only require two or three drivers. But the days of a two-man team competing in a 24-hour event are long gone; teams now look to four or five drivers to contest these lengthier events.

Some of the added drivers come from within sports car racing, drivers who don't have a full-time job but provide safe options for teams looking to fill out their rosters. NASCAR drivers have also joined the field in recent years, especially since Grand-Am took over the event in 2000; Grand-Am founder Jim France is the son of NASCAR founder Bill France, and the two sanctioning bodies have merged their communication resources for the past few years.

But IndyCar drivers past and present may be some of the most popular additions to driver lineups, primarily in the top-tier Daytona Prototypes, for this prestigious event. For each of the past five years, and seven times in the past decade, a driver with significant IndyCar, CART, or Champ Car experience has taken the overall victory as part of a team. In fact, 2006's winning team was composed solely of Scott Dixon, Dan Wheldon, and Casey Mears, the former two full-time IndyCar drivers and the third an ex-CART and current NASCAR competitor.

This year is no different, as over two dozen drivers with open-wheel chops will appear at Daytona once again. Need help keeping up with who's where? Look no further:

Open-Wheeler Super Teams: It's no surprise that Chip Ganassi would employ five current or former open-wheel drivers between his two Daytona Prototypes. Ex-CART driver Scott Pruett has been his lead driver for years now, in the No. 01 car, and will drive with Graham Rahal. Ganassi's second car is traditionally reserved for his NASCAR and IndyCar drivers, and this year is no different; Scott Dixon, Dario Franchitti, and CART champion-turned-NASCAR driver Juan Pablo Montoya will wheel that vehicle.

Current IndyCar Drivers: Rahal, Franchitti, Dixon, and Wilson aren't the only current IZOD IndyCar Series competitors to land a drive. Ryan Briscoe will work with Wayne Taylor Racing, which has a history of fielding Team Penske drivers in the event. Meanwhile, Ryan Hunter-Reay will return to Level 5 Motorsports, with whom he competed in a handful of American Le Mans Series events last year. Joining him there will be Raphael Matos, whose 2010 Rolex 24 drive at Brumos Racing no longer exists as a Daytona Prototype.

CART, IRL, and Champ Car Alumni: Many open-wheel drivers migrate to sports car racing when their careers at Indianapolis end. Often times they become sports car champions as well. Action Express Racing, which has in effect taken over the Brumos Daytona Prototype operation as that team shifts to GT, has hired three drivers who have followed this career path: 2004 Indianapolis 500 and 2009 Rolex 24 winner Buddy Rice in the No. 5, and 2002 Rolex 24 winner Max Papis and 2004 winner Christian Fittipaldi in the No. 9.

But they aren't the only ones. Ex-PacWest driver (and now IndyCar driver Mike Conway's agent) Mark Blundell will drive in the No. 23 for United Autosports, which is running in partnership with Michael Shank. Shank will also have Michael Valiante, once a budding open-wheel talent but now a seasoned Grand-Am vet, in his primary car, the No. 60. Meanwhile, Starworks Motorsport will employ Jan Heylen and Ryan Dalziel, two competitors in Champ Car's final season, in their No. 7 and No. 8 cars, respectively. Ex-IRL driver Tomas Enge will join Dalziel, who won last year's Rolex 24, in the No. 8.

Finally, Pruett and Montoya aren't the only former CART drivers appearing in the event to somehow be affiliated with Chip Ganassi. Nicolas Minassian, who drove the team's No. 12 car briefly in their 2001 rebuilding year, has competed in the 24 Hours of Le Mans for the past few years and step into Krohn Racing's No. 76 for this year's event. But unlike years past, the 1996 CART champion for Ganassi, Jimmy Vasser, will not step into the No. 99 for Bob Stallings Racing.

GT Class: Four Atlantic Championship alumni will compete in GT cars in this year's event. 2004 fifth-place finisher and ex-Champ Car driver Ronnie Bremer will drive in Stevenson Motorsports' Chevrolet Camaro, while 1998 third-place finisher and former CART supersub Memo Gidley will step down from the Daytona Prototype of Doran Racing to a Mazda RX-8 with Team Sahlen.

The other two drivers will run Mazda RX-8s with SpeedSource. 1999 Atlantic title winner and longtime Grand-Am competitor Anthony Lazzaro will drive the No. 69. Jonathan Bomarito, the 2008 series runner-up, had been on the fast track to Champ Car until the series folded; now, he's found a home in SpeedSource's Castrol-backed No. 70, in which he finished fourth in last year's points.

A list of all open-wheel affiliated drivers, sorted by car number:

Posted by Christopher Leone at 10:04 AM