Opinion: A Quantum Leap Back Towards Legitimacy 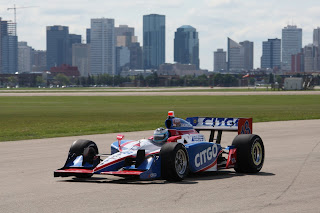 Those of you lamenting the recent unqualified ride-buyer trend in the IZOD IndyCar Series, take note.

IndyCar's TEAM program - which allocates about $1.3 million to full-time teams in lieu of purse money in 16 of the series' 17 events - has been restructured to accommodate 22, instead of the previous 24, teams.

Those sitting on the sidelines? The second cars of Conquest Racing - which saw five pay drivers take the reins this year - and Dale Coyne Racing, who employed the relentlessly mocked and embarrassingly slow Milka Duno.

With that single step, IndyCar drew a hard line in the ground between who deserves to be there and who doesn't.

Granted, the reality is slightly more complex than that for Conquest. They started the season with Mario Romancini and added Bertrand Baguette in a second car after missing the series' first two events. As the season went on, Romancini yielded to other drivers with more money, and Baguette became the team's lead driver, the two cars' numbers - 34 for the lead car, 36 for Baguette - swapped in reflection. But in the end, the 34 (now Baguette's team), the more deserving team, got paid, and the 36 didn't.

Of course, it seems like a slap in the face to longtime owners Dale Coyne and Eric Bachelart, ex-CART drivers and Champ Car owners. And in a way, it is. These guys have their own side of the story - neither are big-time owners with multi-million dollar sponsorship contracts like Chip Ganassi or Michael Andretti. Neither can afford to employ too many drivers that don't bring at least some money with them.

But, at the same time, they chose to bring on drivers who were clearly miles off the pace. Duno drew the ire of competitors for her consistently slow times, as she has since joining the series. Meanwhile, Bachelart brought on the previously unknown Francesco Dracone, who wasn't much faster in his brief audition with the team, and followed him with Tomas Scheckter and Roger Yasukawa.

Understanding that drivers like this weren't going to cut it if IndyCar ever wants to approach NASCAR again in legitimacy, Randy Bernard and Brian Barnhart had to act quickly. They started by putting Duno on probation over the summer and threatened not to renew her license for 2011; she's not likely to be back. Now the TEAM parameters have been adjusted to penalize the two owners most guilty of hiring unqualified talent last season.

Don't think the rest of the sport isn't taking notice.

And perhaps best of all, after a dismal 2010 that saw the team suffer through poor runs with Hideki Mutoh and only employ Rahal for five races - a long way to fall from their seventh place performance in 2009 - Newman/Haas Racing is testing 2010 Lights runner-up James Hinchcliffe and longtime Champ Car stalwart Oriol Servia at Sebring International Raceway in mid-December with the intent of bringing both to the series in 2011.

There's not a single driver on that list that doesn't have the confidence and respect of the majority of the IndyCar paddock. Most have taken victories in IndyCar, Champ Car, or Indy Lights. The only one who hasn't, Kimball, had four runner-up finishes in Lights this year.

It also puts potential sponsors in a bit more of a pressing position. It's still a free market, under which they can shift money to whomever they please. But in order to tap into IndyCar's highly populated markets, desirable fan demographic, and recent positive momentum, and to make sure that the team they work with gets paid at the end of the season, they have to hire a driver with the chops to put on a good show and not stink up the back of the grid.

And, like it was in the sport's heyday, the only ones lamenting will be the ones who aren't fast enough to make the cut.
Posted by Christopher Leone at 10:37 AM