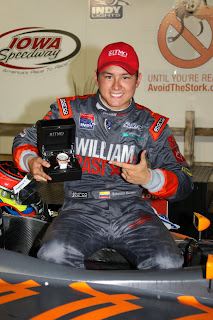 For the past two years, Sebastian Saavedra has been establishing himself as one of the brightest young talents heading up the Road to Indy ladder.

Since coming stateside in 2009, joining the illustrious AFS Racing program in the Firestone Indy Lights Series, Saavedra has posted two wins and two top-10 finishes in the championship, coming third in 2009 and eighth this year. This year's finish was even more remarkable considering the fact that he missed the final two races of the season after leaving Bryan Herta Autosport.

Saavedra made his IndyCar debut in the 2010 Indianapolis 500 for Herta's team, and returned to the series at the end of the year with Conquest Racing. After a strong American debut in 2009, Saavedra spent much of 2010 assembling a strong team of advisors; his new manager in America is longtime IndyCar mechanic and team owner Derrick Walker, while two-time Indianapolis 500 runner-up and Colombian countryman Roberto Guerrero serves as a driver coach.

Saavedra is currently home in Colombia relaxing after a hard-fought 2010 campaign, while also attempting to put together a program that will see him compete for IZOD IndyCar Series Rookie of the Year honors in 2011. In between travel obligations, Saavedra agreed to an interview with us, and we're happy to provide the transcript below.

First things first: how and when did you get your start in auto racing?

SS: I started when I was 8 with an uncle who bought me a go-kart. My dad wasn't very into the idea of racing so I needed to wait couple of years before he got the bug. I did the racing school and surprised many heads around so my career started right away here in bogota, colombia.

You’ve taken wins in Formula BMW, Formula 3, and Firestone Indy Lights cars. How do these very different cars compare to one another? Was one type of car easier to drive than the others? Faster?

SS: I would say there's no easy car to drive. They all have their secrets and their way to be driven. Of course the speed changed with each class cause of the HP but they all had their charm. I really enjoyed the F3 as it was the nicest, lightest and with more Down-force.

You drove for Andretti Autosport in 2009 before moving to BHA this year. How were the two teams different from one another? Did you have to work with one team differently than with the other?

SS: They were both very professional teams with a particular goal in hand. Win. As a driver you need to change with the situation and scenery. Andretti was a very interesting experience in every way.

By now everybody knows that your season with Bryan Herta Autosport in Indy Lights did not end as well as either side would have hoped. Can you explain why things went downhill, and how your relationship with the team ended?

SS: The relationship never ended, things happened and were unfortunate. We were more focused on the IndyCar program than Indy Lights and sometimes it hurt but I enjoyed driving for a great driver I followed when i was younger and he gave me the opportunity to do the Indy 500 which I will never forget.

Do you have any regrets about the way that things ended with BHA?

SS: Not at all. This is a very professional bussiness and we both understand the paths we need to take to keep our success. Bryan is an amazing guy with lots of future, maybe not with me.

After that, you worked with Conquest Racing and Derrick Walker for this year’s season finale at Homestead. Were you pleased with the way things went at Homestead? What was it like working with a new team for only one race weekend?

SS: Was by far the nicest experience I've had in a long time. Was very risky as we left it all in the table but thank god all went our way. Conquest Racing gave me the right material and engineering to show all my potential which I'm very thankful. Derrick Walker managing me from now on is a big honor aswell as I admire his working scenario and ethics.

Do some of the things you learned driving in Indy Lights translate to the bigger IndyCars, or are they completely different?

SS: I got to say that the Firestone Indy Lights was the best school possible to move up into the IndyCar. It's very close on the way of driving the cars and gives you a very good idea on how its going to be when you get to the big cars. So yes it does translate many things.

Looking forward to next season, you have said that you will be racing full-time in the IZOD IndyCar Series. Do you have sponsorship lined up already? Can you give us any insight on which team you might be driving for? Are Conquest and Walker options for next year?

SS: Mr. Derrick Walker is not part of Conquest Racing, he is my manager. We are still working very hard on getting the right sponsorship and we have good team options that we are already finishing with but thats as much as I can give you right now ;)

Growing up in Colombia, I’m sure you had some different racing idols growing up than some American drivers did. Who are some of the drivers that have influenced you?

SS: For sure Montoya was one of the big drivers I followed since I started as he put the sport on the map here in Colombia. I've always been a big fan of TK and as I lived in Brasil for cuople of years he became very big for me.

SS: I'm living in Indianapolis the complete season. I like this as I can keep very focused on my gym and engineering. I usually go to Colombia when theres a sponsor event or any important deal going on, so usually I hope to go down a lot. HA

Your management group includes Derrick Walker, and earlier this year you had former Colombian IndyCar driver Roberto Guerrero as a driving coach. How much does it help to have two people with that much experience in IndyCar helping your career along?

SS: It's great to have such an interesting group of people behind me as they give me great confidence with the amount of experience they have to give. Im very pleased on their work and want to continue close together for a long time.

SS: There's something very important I've been giving my fans and its the pleasure of dreaming! When you dream very hard and wish something, with lots of work everything is possible.

Finally, what are your goals for the future? You’ve said that an Indy 500 win is one of your goals, but beyond that, are you looking to go to Formula One someday? Any other championships or races you’d like to win?

SS: F1 for sure is my big goal. Something I've often heard its just too hard to get but my dad has always said.." if it was easy anyone could do it' I go by that principle and work on it. I want to win more than one IndyCar championship and be a positive Colombian figure to follow.

Thanks once again to Seb for agreeing to do the interview, and we at OWA wish him the best of luck in 2011 and beyond. Check out his personal website at http://www.ssaavedra.com, and be sure to follow his Twitter account at @sebsaavedra.
Posted by Christopher Leone at 1:10 PM