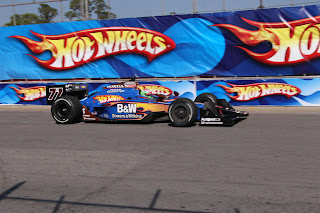 Alex Tagliani spent more of this season racing up front than anybody could have expected.

The Canadian spent the 2010 IZOD IndyCar Series season with the newly established FAZZT Race Team outfit. While much of the personnel, including former Walker Racing team manager Rob Edwards, had been taken from established teams, their cars had been purchased from Roth Racing, a former series backmarker. Expectations were, therefore, not overly ambitious for the new team.

So it was a surprise, to say the least, when Tagliani opened the season from the outside pole at Sao Paulo.

Unfortunately, through 28 laps of that race, Dan Wheldon got into the back of Tagliani and sent him spinning into the wall. The damage was severe enough to knock Tagliani out of the race, setting an unfortunate trend for the rest of the season: strong, quick runs in qualifying sessions, only to be marred by relatively disappointing finishes.

St. Petersburg and Birmingham gave the team its first top-10 finishes of its short existence, but Tagliani suffered a wrist injury during the Long Beach weekend, crashing out of that race as well. The team would thus head into the first oval segment of the season mired in 14th in points. Expectations were once again low, as the former Champ Car driver had only three oval starts in IndyCar.

But Tagliani and FAZZT shocked and surprised in the next three events. Kansas and Indianapolis alike yielded fifth place qualifying runs, and two more top 10 finishes. At Texas, Tagliani managed to lead 33 laps, although he only came out of the weekend with an 18th place run, finishing three laps down.

From there, unfortunately, the finishes were not particularly strong.

A series of low finishes from Iowa to Toronto was punctuated by a crash coming off a restart at Edmonton, where the Canadian was tagged by Mario Romancini in his final start of the season. The high point of this period was the stylish Hot Wheels livery that Tagliani carried in the two races in his home country; unfortunately, he could not bring home a solid finish in either event after nearly taking the Toronto victory in 2009.

Mid-Ohio broke the streak of subpar finishes. The team's best race of the season saw Tagliani, who had seen bad luck take him out of races all season, finally stick around for the finish. He led a race-high 30 of 85 laps to finish fourth. It would prove to be his only top five finish and final top-10 of the season. Even still, it affirmed the paddock opinion that Tagliani and FAZZT were no pushover, if only their luck could improve a little bit.

From there, the rest of the season was nothing to write home about. Tagliani, who had qualified eighth or better in five of the first six races of the season, only had three top-10 starts from Texas to the end of the season. Four of the final five events yielded finishes between 13th and 15th, with the lone exception a crash out at Chicago. He ended the season 13th in the overall standings, scoring 302 points with five top-10s and four DNFs. He also placed 13th in both the oval and the road course sub-championships.

As far as new teams went in 2010, Tagliani and FAZZT were far and away the best. With sponsorship somewhat stabilized, the team establishing a solid rapport through the growing pains, the potential of a teammate, and Tagliani entering the second of a four-year contract, 2011 should be an even better year for the small all-Canadian outfit. In fact, Tagliani may be primed for his best season since his seventh place run in the 2004 Champ Car World Series.
Posted by Christopher Leone at 9:38 AM